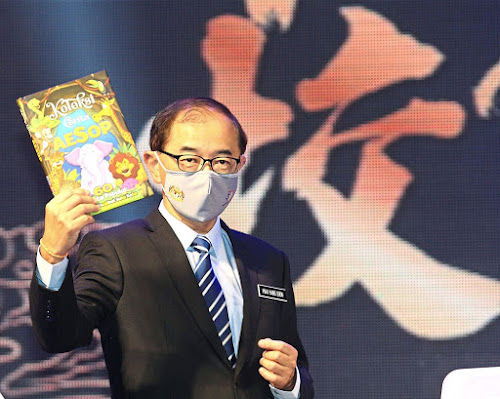 BEING a teacher can be a financially rewarding career.

Deputy Education Minister Datuk Dr Mah Hang Soon said teachers could receive remuneration of over RM9,000 depending on the years of service.

“Educators in school management positions can receive even more,” he said when launching the “I Want to Be A Teacher” event at Kwang Hua Private High School last Sunday.

Some 160 students who attended the event were briefed about the teaching profession and what it entailed.

Describing the profession as “recession-proof”, he said teachers enjoyed many perks civil servants were entitled to including work stability, ample vacation time, fixed working hours and civil servant welfare for themselves and family.

The respected profession can also bring a great sense of accomplishment in an environment that promotes continuous learning through self-improvement workshops, he said.

“Respect for teachers is greatly lacking in society and the fact that fewer youths are choosing to enrol in teaching courses is a cause for concern,” he said, adding that there is a shortfall of teachers, not only in Chinese primary, secondary and independent schools, but also national schools.

In a separate event on Monday, Mah advised youngsters to read more books of all languages to increase their general knowledge and also to get a better understanding of the national language.

Noting that countless studies have been conducted by world-class institutions on the importance of reading and how it affects people, he shared that Yale researchers found that those who read books for 30 minutes daily lived an average of 23 months longer than non-readers.

He pointed out that Malaysia still has potential to boost its literacy rate which currently stands well above 90%.

“The country’s literacy rate is high, but we should not rest on our laurels.

“We should follow in the footsteps of advanced nations such as Finland, Japan, South Korea and Germany where the literacy rate is either 99% or 100%.”

Touching on the “Matthew Effects”, he said the analogy coined by scholar and psychologist Keith Stanovich shows that a poor reader or struggling reader will suffer as he progresses in his life.

“It will become worse as he goes to a higher level or as he gets older. In contrast, a person who likes to read or a good reader who reads more, will progress better in life. This means that the poor become poorer and the rich become richer,” he said after launching the SJK(C) reading campaign or Kempen Galakan Membaca SJK(C) at the HGH Convention Centre.

Piloted in Chinese vernacular schools, the nationwide reading campaign which began on Sept 7 was aimed at inculcating a love of reading among students, he said.

Its main objective was to drive up students‘ interest towards reading books of different languages, not just books in their mother tongue.

Mah said it was an expansion of an online reading campaign that was conducted by the Kuala Lumpur education department in May among local Chinese primary schools during the movement control order.

He hopes the initiative will also be conducted in Tamil and national schools.

“Five programmes under the Kempen Galakan Membaca SJK(C) will be rolled out in stages in all Chinese primary schools across the nation,” he said.

These include newspaper and book reading activities, quizzes and roving libraries.

The programmes are not only to encourage students, but society and parents to read.

Establishing a solid reading culture can’t be done overnight and cooperation from all parties is needed to boost the country’s literacy rate, he said.

“Teachers and the school administration play an important role in creating a strong reading culture but parents are crucial because education starts from home,” he said adding that about 18.6% of the student population in SJK(C)s are made up of non-Chinese pupils and the percentage is increasing.