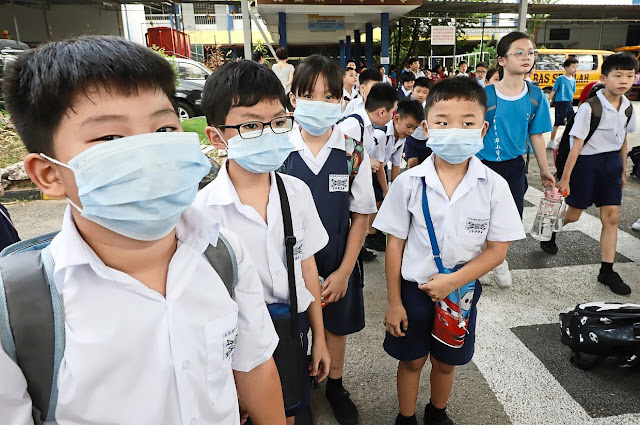 The education ministry last week said it would implement a one-metre gap between desks when schools eventually reopen after being suspended since mid-March as part of measures to contain the spread of Covid-19.

Other measures outlined in the ministry’s guidelines for the reopening of schools include a rule that children should eat their recess break snacks in teacher-supervised classrooms in order to prevent overcrowding at the canteens.

On Friday, Education Minister Radzi Jidin said Form 5 and Form 6 students would return to school on June 24 , with classes limited to 20 students each. However, he did not provide a schedule for the resumption of other classes.

A primary school teacher in Selangor said: “I’m not as worried about the students in secondary school as they can take better care of themselves, but I think it’s impossible to implement social distancing for the primary classes.

“Primary school pupils are younger and need more guidance, especially those from Primary 1 to 3 who are more playful. If you ask them to stop making noise or playing with their friends, they will only last one minute,” he added.

Another primary school teacher also said schools should pay more attention to the implementation of social distancing among pupils from Primary 1 to 3 as they would not be as aware of its importance.

Saying that pupils would be “very happy” to play with their classmates after the long break, the teacher predicted that they would then “forget all about social distancing”.

A primary school teacher from Johor agreed that younger pupils would have to be constantly reminded about SOPs such as social distancing, especially as they were less likely to follow instructions.

He suggested that two teachers be allocated to each class from Primary 1 to 3 as it would be “more challenging” to implement social distancing for those pupils.

“They are younger and it’s difficult to take care of them, especially since they like to wander around,” he pointed out.