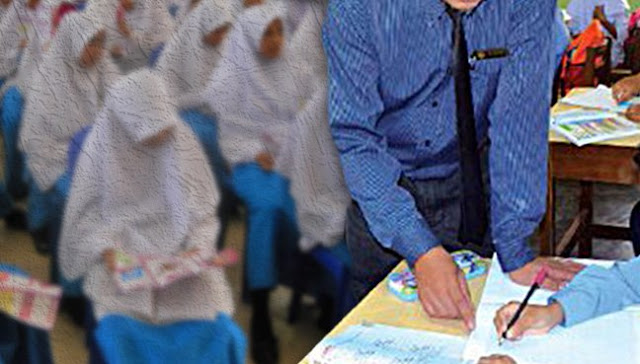 (If your mothers and sisters are attending the ceremony tomorrow, inform them to come properly covered. Do not dress in sleeveless outfits, shorts or skirts. Keep in mind that I am still a bachelor – I cannot handle the temptation.)

And a few weeks ago, he made another similar statement. During a Form Five student’s gathering at the school hall, he warned the female students not to wear anything above the knees for their upcoming high school graduation. His excuse – “Cikgu tak tahan.”

I also know of parents who have lodged complaints following these incidents – but instead of taking action against the teachers, it is the parents who are rebuffed. For some reason, the school administration often seem defensive of and protective over their “Cikgu Tak Tahan”.

Having heard and witnessed this for donkey’s years, it did not come as a surprise to read about the latest Cikgu Tak Tahan incident, news of which flooded our social media – yes, I am referring to the infamous case of a Tamil schoolteacher, who allegedly molested nine students at a school in Hulu Selangor. He has since been transferred to another school.

In fact, a few years ago, a teacher in a similar case, was transferred to a primary school in Hartamas. Reason given – he was close to retirement. Parents from the school’s PTA raised a hue and cry when they got wind of it but to no avail. And not too long after, the same teacher was accused once again in his new school – this time, a 10-year old girl accused him of kissing her and paying her RM10 to zip her mouth. According to a source close to the victim’s mother, the teacher was once again transferred elsewhere.

Cases like these are unfortunately nothing new in Malaysia. I bet if you browsed the Internet, you would find many more. Seriously, this recent case isn’t the first and trust me, won’t be the last.

Many have called for the Education Department to re-evaluate its decision to transfer these Cikgu Tak Tahan. So I was somewhat shocked to read a few online comments from people actually defending these alleged offenders, arguing that it was only right they be transferred while investigations are underway. They claimed it is unfair to pass judgement before the teachers were found guilty. Some even argued it was possible the victims invented the stories.

Whatever the case, I find it quite baffling.

Frankly, if teachers alleged to have committed sexual crimes were transferred to another school because they were deemed innocent until proven guilty, I wonder…


Perhaps then we can see if our ministers still think transferring these Cikgu Tak Tahan to new schools while investigations are underway, is the most sensible thing to do.

Original article can be found at FMT
jobs from my.neuvoo.com