Penulis Admin
Cambridge English
CEFR
English
MBMMBI
PUTRAJAYA: The English Language Roadmap 2015-2025 aims to bring the 48 per cent or 19,200 of 40,000 primary and secondary school teachers to be graded as proficient English language users by 2020.

The roadmap uses the Common European Framework of Reference for Languages (CEFR), an internationally recognised framework that describes six levels of language ability from A1 for beginners up to C2 for those who have mastered a language, to guide the transformation of English language education in Malaysia.

Education Minister Datuk Seri Mahdzir Khalid said these group of teachers (48 per cent) were currently categorised as B1 and B2 independent user level, which were the third and fourth highest under the CEFR.

“The big group of 52 per cent of English language teachers are currently graded as proficient users, the two highest level of language proficiency under CEFR’s six band scale.

“This is our roadmap target to create a high quality teaching workforce courses whereby teachers will need to improve their proficiency, knowledge and skills, besides keeping up with advances in the language teaching,” he said when launching the roadmap here yesterday.

Mahdzir said the teachers, who were fresh graduates, actually had the language proficiency until they were posted to various states including rural areas.

“Among the reasons why such things happen is because of the postings and working in rural areas, the teachers did not keep up with the language and eventually lose the language along the way,” he said, adding the training was ongoing in order to reach the target by 2020.

He said the ministry’s English Language Teaching Centre (ELTC) was the lead agency responsible for the implementation of the roadmap to ensure the English language development from pre school to universities and teachers’ training institutes.

The ministry would also be collaborating with Cambridge English, which is affiliated with Cambridge University, to ensure that the quality of English education in Malaysia was up to international standards, he said.

Mahdzir said the roadmap project would also serve as a guide for teachers to ensure that students achieved proficiency levels aligned to international students.

“It is the ministry’s responsibility to equip the students with the language skills especially English as school offers the foundation level for the job market,” he said.

To another question, Mahdzir said the government had no plans yet to make it mandatory to pass the English subject in the Sijil Pelajaran Malaysia examination. — Bernama 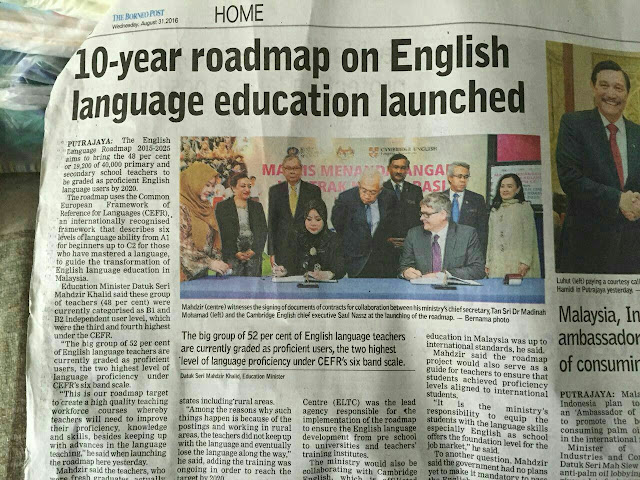