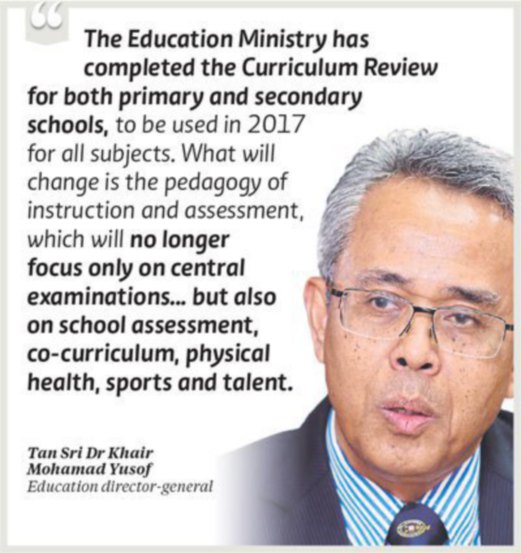 “The Education Ministry has completed the Curriculum Review for both primary and secondary schools, to be used in 2017 for all subjects.

“What will change is the pedagogy of instruction and assessment, which will no longer focus only on central examinations, like Sijil Pelajaran Malaysia (SPM) and Ujian Pencapaian Sekolah Rendah (UPSR), but also on school assessment, co-curriculum, physical health, sports and talent.”
jobs from my.neuvoo.com
He said students could expect changes of between 15 and 20 per cent in subjects’ syllabi, which had been tweaked after taking into consideration current developments.

The review, he said, would be in accordance with the blueprint, and promote a balance between knowledge and skills. Khair said the spirit behind the move was, among others, to inculcate creative thinking, innovation, problem solving and leadership skills in students.

The blueprint states: “The curriculum will still stress on student-centred and differentiated teaching, but it will have a greater emphasis on problem-based and project-based work, a streamlined set of subjects or themes and formative assessments.”

When asked to comment on the implementation of the pathway, Khair said it was being discussed in the current second wave of the blueprint. Wave 2 was launched this year and will go on until 2020, with the aim of accelerating system improvement.

“(The revamped) KSSR and KSSM, which will be introduced next year, are a stepping stone in the preparation of a fast-track system for students who meet (certain) standards earlier than others,” said Khair.