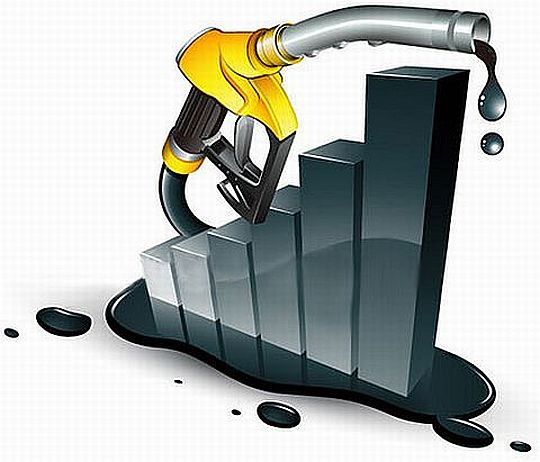 As I forecasted on Facebook yesterday, RON95 price for November was increased by 15 cents last night.
Unsurprisingly there’s an uproar among some (maybe many) Malaysians on social network blaming the government for the increase in fuel prices.

There were some who took extra efforts to prove that fuel prices shouldn’t have increased by uploading oil price charts and they used WTI crude oil chart to show last month’s oil price movement unknowingly that WTI crude which stands for West Texas Intermediate is the benchmark for crude oil price in the United States of America (USA).
First of all let me explain how petrol prices are calculated in Malaysia and how did government arrive to the prices they set every month.

Before 2015, we all know that fuel prices in Malaysia were subsidised by the government; change in internationally-traded crude oil prices didn’t affect fuel prices at pump stations.

After the huge drop in (Brent) crude oil prices in the 3rd quarter of 2014 from around $115 per barrel to as low as $52 per barrel by the end of 2014, government decided to do away with the fixed price-fuel subsidy system and set the fuel prices according to the global oil prices by revising the prices of RON95, RON97 and Diesel EVERY month according to the average prices of those petroleum products in the previous month.

I’m going to focus on RON95 as I believe it’s widely consumed among Malaysians and if you can afford and fill your tank with RON97, I don’t think you care about the changes in fuel price.

Retail fuel prices are determined by using a method called Automatic Pricing Mechanism (APM) which has been used since 1983. 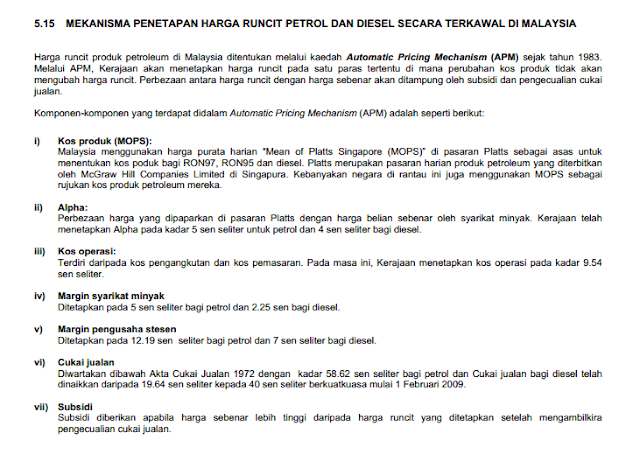 There are 6 components that need to be calculated before government set the fuel prices which are product costs, exchange rate (USD-MYR), alpha, operating costs, oil company’s margin and petrol station dealer’s margin.

Product costs are costs of refined products which are the finished/processed products of crude oil. In Malaysia (and other Asian countries including Australia) we used pricing benchmarks from Singapore (Asian oil trading hub) called Mean of Platts Singapore (MOPS) to calculate the retail price of RON95. The MOPS prices are published (in US Dollar) everyday by the McGraw Hill companies and unfortunately can only be accessed by paid subscribers.

Exchange Rates are used to convert MOPS prices in US Dollar to Ringgit Malaysia. I don’t know which benchmark for USD-MYR exchange rate is used by the government but I use daily USD-MYR rate published by Bank Negara on their website.

Alpha is the difference between the published MOPS prices and the actual price of finished products bought by the oil company which is fixed at 5 cents per liter by the government.

Operating costs include transportation and marketing costs of oil companies of which is set at 9.54 cents for every liter.

Oil Companies’ Margin is fixed at 5 cents per liter.

Petrol Station Dealers’ Margin is guaranteed and set at 12.19 per liter.

Product costs and exchange rates are variable costs which change every day according to the market forces and alpha, operating costs and margins for oil companies and petrol station dealer are fixed costs set by the government.

Then we convert MOPS95 per liter in USD into Ringgit term:

Finally we add the fixed costs of 32¢ to the variable costs (product costs and exchange rate) to get the final price of RON95 on the 31st October of 2016.

Yesterday’s actual price for RON95 was RM1.96 while the price of RON95 set by the government for October is RM1.80 per liter meaning we paid less than the actual market price.

Last night the price of RON95 was increased by 15¢ to RM1.95 per liter but how did government arrive to this 15¢ increase?

Under the managed-floating mechanism, government determines the prices of petrol and diesel according to the monthly average prices of the products.

Prices of RON95 for the whole month will be calculated and divided by the number of days in the month (excluding the weekends and public holidays).

Since the MOPS95 data are not publicly available and exclusive only for the paid subscribers I take the liberty to publish the data (my older brother is one of the subscribers) to show you guys how RON95 prices are determined every month.

Below are complete MOPS95 prices and RON95 prices (calculated for you) for August 2016: 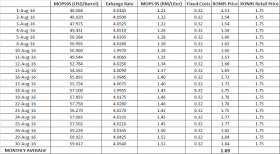 Let’s see the price of RON95 for September and examine why it’s increased by 10¢ at the end of September: 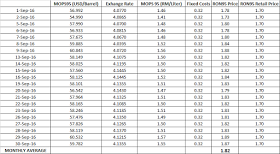 Average price for RON95 in September was RM1.82 per liter compared to retail price set at RM1.70 per liter.

By the end of September, RON95 price was increased by 10¢ to RM1.80 per liter for October retail price also in line with the average price RM1.82 per liter (rounded up).

Lastly let’s see the prices of MOPS95 and RON95 in October and comprehend why RON95 price was increased by 15¢ for November last night: 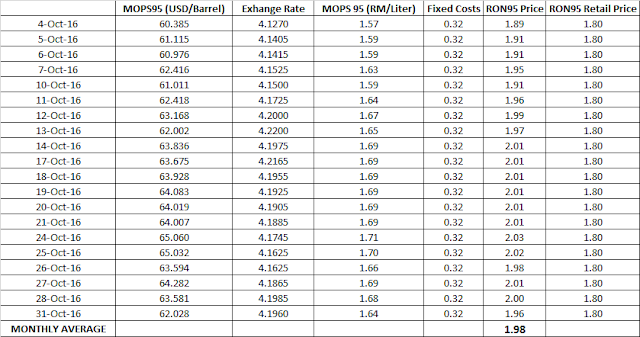 Average price for RON95 in October was RM1.98 per liter higher than the retail price of RM1.80 per liter.

By now I hope you guys understand how RON95 prices are set by the government every month.

Some were asking why fuel prices didn’t change in April-May and July-August.

I’m gonna be blunt and say it’s probably because there were Sarawak state election in May and by-elections in Sungai Besar and Kuala Kangsar in June.

I personally don’t support this kind of policy because I think the government should revise the price every month regardless there’s an election or not in that particular month.

But it’s up to the government and I don’t have the say in it.

Anyway back to the point about 10¢ and 15¢ increase in RON95 prices for the October and November respectively, they were set and determined not without basis.
We should not use the WTI or Brent crude chart to determine the finished product (RON95) price.

Sure you can monitor the movement in WTI and Brent crude prices and deduce whether RON95 price will go up or down next month, but it won’t be accurate.

You cannot just upload the WTI and Brent crude oil charts on FB and Twitter without context and say the RON95 price should be reduced instead of increased and government is stealing from the people.

There are other important factors which are exchange rate (USD-MYR) movements, the cost of the finished products (RON95) itself and fixed costs.

And then there are this group of people who said Malaysia in an oil producer country so we deserve a subsidised lower than market fuel price.

Even Norway which produced 1.958 million barrels per day doesn’t subsidised its fuel price for consumption.

Overall, we are just ranked 25th in the oil producers ranking. 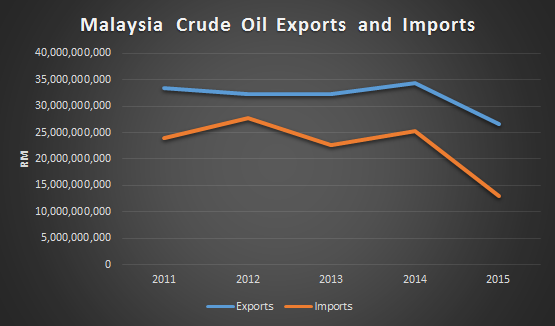 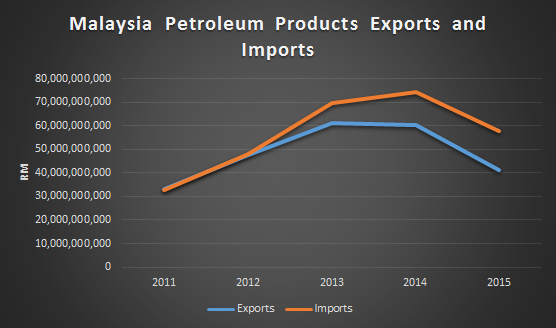 So this notion of “we should enjoy lower-than-market-subsidised oil price because we are an oil exporter” is a fallacy at best.
We export more crude oil than we import, but we import more refined products than we export.

I hope this writing clears the air and every end of the month, we will be prepared for a revision in fuel prices and stop blaming the Prime Minister, government, 1MDB, donation and whatnot.

Stop the ignorance, be rational and be fair to yourself.

p.s. My response to YB Rafizi Ramli's response on the increase in RON95 prices. Basically he blamed the depreciating Ringgit as the main cause why RON95 price was increased. While USD-MYR exchange rate is among the factors that determine the price of RON95, it's not the main factor for last month. Do read them.